How to give up without giving in 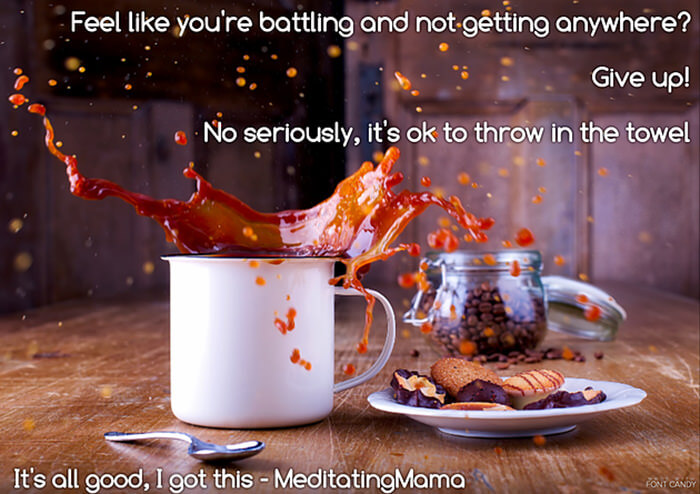 We’ve all heard the sayings “don’t give up”, “never quit”, “don’t pack it in just before you reap it in (ok I just made that one up) but you’ve no doubt heard something similar. I have certainly heard myself and others urging me on when the going gets tough which is great because typically we must never give in.

So you’ve had one of those days, or moments, or months or heck even years, where life isn’t “flowing” the way you would like it to. Yet you soldier on regardless, doing whatever’s needed to pick yourself up and dust yourself off.

When finally something inside snaps and a part of you (a big part) says ENOUGH!!!

And you give up.

Which feels sooooo good because you start to think about what you actually want to be doing with your time rather than what you should be doing with it. You stop caring what others are going to say and do what the heck you want anyway.

Trying and efforting are pushing energies, so sometimes the harder we “try”, the more we’re pushing the very thing we want away from us.

When that little voice which starts as a whisper, gently telling you something is too hard, becomes that booming voice in your head that says ENOUGH. That’s your opportunity to STOP.

Speak to that booming voice. Ask it what it needs.

Because 9 times out of 10 it’s a part of you you’ve shut away, sacrificed with all the efforting to get something you want. Or it’s the part of you that’s sick of you being so hard on yourself.

And these are important parts.

It’s the parts of you that put you first.

It’s the parts of you that allow.

Allowing is a drawing energy. It’s relaxed and open and welcoming. It’s a feeling of peace and a knowing that all will come to you when you trust, have faith and believe. When you let go, you allow. When you give up, you surrender. And in surrender you give over control to a greater part of you. The part that knows exactly what you need to be happy, successful, loved, peaceful, prosperous…

Whereas the efforting part doesn’t look at the greater picture, it just looks at the life story around you and what you don’t want, what you’re trying to get rid of / change / leave. These are all negative aspects, that if you focus on, you attract.

As an example, I have someone in my life who I wish desperately to have good relations with. It certainly would benefit a lot of people for us to do so. But I had tried many different ways to build good communication, trust and friendship but inevitably resulted in the same outcome. So one day I thought F@ck !t and gave up. And as soon as I did that a weight lifted. I no longer held myself responsible for his emotional state. I freed up my mental activity because I stopped caring about how he felt, putting myself instead as the priority. This led to me questioning what it was I needed in order to feel peace around our relations, and so I took completely different steps to set up a new way to communicate. But it was only in that moment of letting go, where I was free from the responsibilities that I had placed on myself, that I could see an alternative solution. As a result we both now can feel what we choose to without impacting each other.

So, I definitely say never give in. Always keep dreaming and believing, but every now and then when life seems “too hard”, consider that perhaps it is and give up. Stop trying and let life surround you and take you where you need to go. Or at the very least, give up in your mind, enjoy the feeling of not caring, enjoy the feeling of selfishness and doing whatever it is that you want to do, and from that place consider how you could adjust your life to bring more peace, harmony, joy, fulfillment … into it.

Because, as L’oreal says, “you’re worth it!”